Whether you are going for a last minute day trip, weekend away, or planning a longer holiday, here are some of the most beautiful beaches in the UK to visit by train.

Beaches can be like old friends who just make you feel good when you are with them. They are both uplifting and relaxing to be with, sometimes in the mood for a party and other times just want to chill in peace. Like good friends, beaches are also always there when you need them. Several of our favourite UK beaches, many of them Blue Flag beaches are, of course, accessible by train.

The Isles of Scilly, Cornwall

Beauty doesn’t always come easy, especially when it comes to the Isles of Scilly which are a 2 hrs 45 mins ferry ride from Penzance station. If you are a serious beach lover, however, you have to ‘do Scilly’ at least once in your life, famous for their turquoise waters and pale, fine sand with over 35 such shores in this prettiest of archipelagos. There are five inhabited islands, the largest being St Mary’s, reached by ferry from Penzance. So book the train and make this your Scilly year. 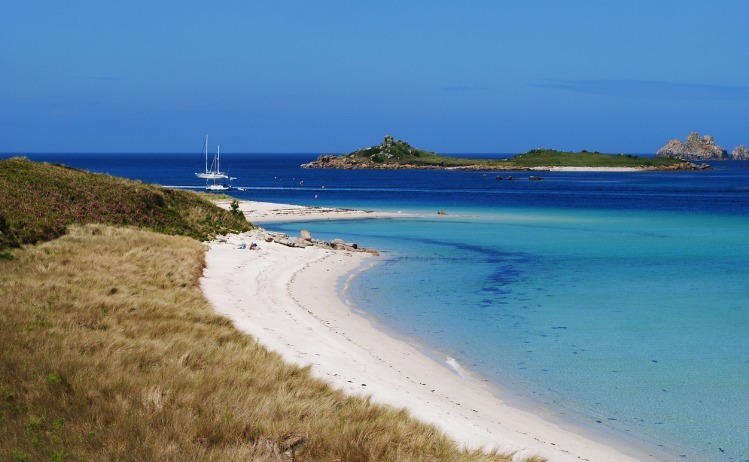 People who know this stretch of coast go back year after year, and yet it still remains undiscovered by beach lovers whose default setting is to head south when the sun shines. The North Norfolk coast is also pretty well served by trains, with the ‘Bittern Line’ running between Norwich and Sheringham. Cromer is the Victorian seaside hub of the region, but other favourites include the beach huts and rock pools at Sheringham and the magnificent sunsets at Hunstanton (the only west-facing seaside resort on the East coast).

Don’t miss the 3.6km promenade walk to Heacham from Hunstanton for one of the best sandy beaches in the UK at sunset. The nearest station to Hunstanton is Kings Lynn (26km), however there is an excellent coastal shuttle services along the coast from here. Take this shuttle to enjoy the 6.4km Blakeney Point walk along shingle spit and dunes, a haven for grey seals. 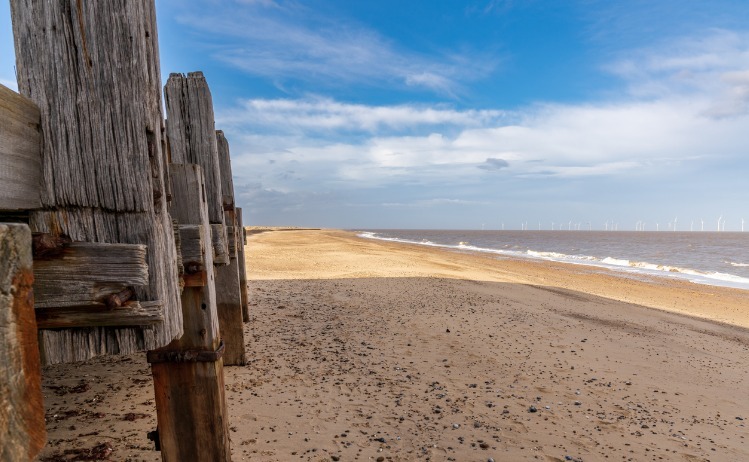 There are several beaches in this traditional and historic seaside town, but Whitby Sands is the most popular, with vast sandy stretches backed by equally vast cliffs. However, keen walkers can find many beaches in the area, heading north on the Cleveland Way to the shale beach at Sandsend or even further to the rock-pooling favourite at Runswick Bay. You can also walk south for a couple of hours to Robin Hood’s Bay with some of the country’s most stunning views out across its golden sands. Book here for trains to Whitby. 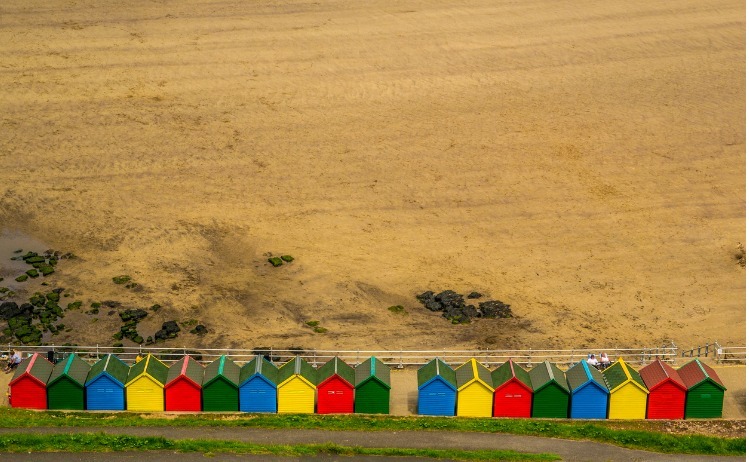 The Highlands and Islands, Scotland

As well as being gateways to the Inner Hebridean Islands of Rum, Eigg and Muck, all boasting beautiful beaches, the stations of Mallaig and Arisaig bookend golden beaches along a 12km stretch. The most famous is Camusdarach, where the iconic movie Local Hero was shot. Port na Murrach beach is another secluded seaside gem 5km down remote tracks from Arisaig. Both Mallaig and Arisaig are on the West Highland line, one of Scotland’s most scenic rail journeys. 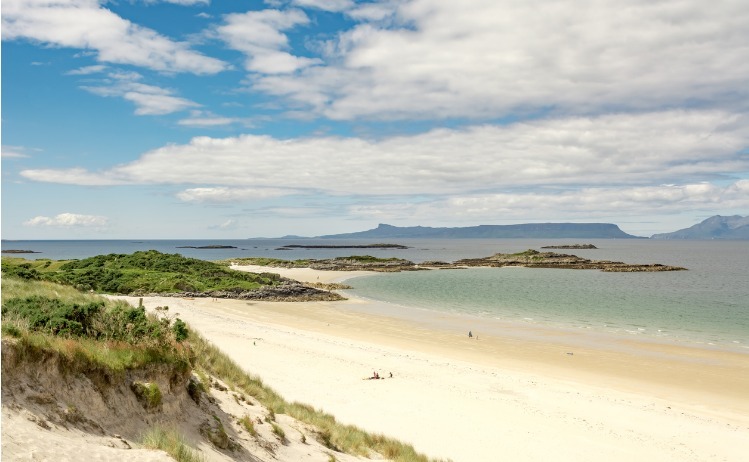 The ticket to Ryde is music to our ears with great value, combined train and ferry tickets to this main port town. Ryde beach itself is a handsome wide stretch, however you can head in any direction on the Isle of Wight coastal path to find myriad magical spots. Pebby Forelands at Bembridge is a secret gem, Compton Bay is a surfing favourite, Freshwater Bay sea kayaking bliss and Ventnor is a timeless spot at the end of the Steephill Cove coastal walk. Book your train and ferry to Ryde here or you can also do a sail rail combo from Lymington - Yarmouth. 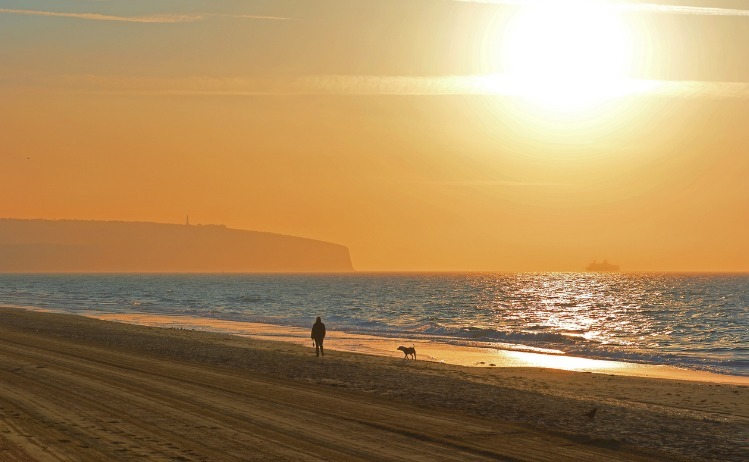 It feels a bit like a group hug as train passengers wave at beachgoers and they wave back, along this stretch of the Devon coast where the train clings to the sea and headland after headland come into sight. The beaches are, therefore, very easily accessible by train. Dawlish Town Beach is sandy and backed by red sandstone cliffs, and Teignmouth (where the river Teign meets the sea, not surprisingly) is a charming, Georgian town with another reddish, sandy beach, to match its cliffs. 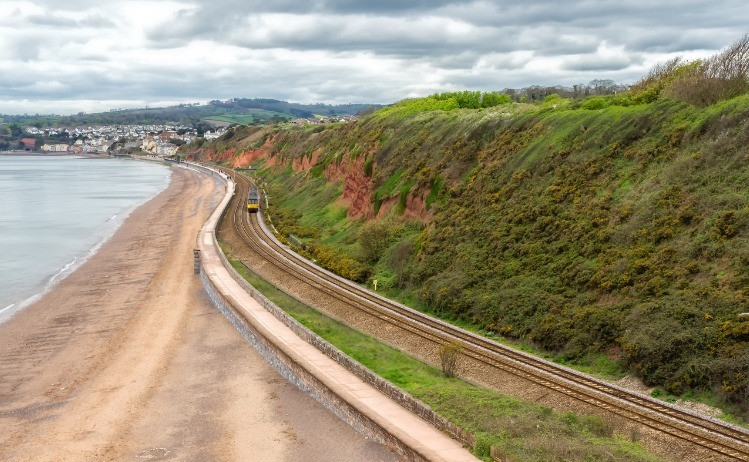 There are so many beaches accessible by train on this south eastern coast line that Londonders who escape here on a regular basis compete for their favourites. Whitstable is beach hut cute and oyster chic. Broadstairs and nearby Joss Bay are family favourites also popular with surfers. Deal is stoney but stunning and a much quieter alternative to Whitstable and Margate is a fun day out with Dreamland fun fair and the Turner Contemporary Gallery adding to the beach fun. Check out the Viking Coastal Trail, a 50km circular cycling route which takes in many of these coastal spots. 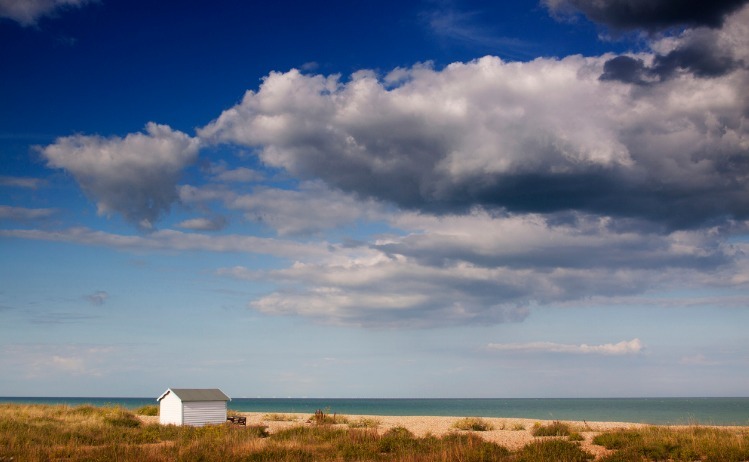 With headland after headland dipping down into one bay after another, the Pembrokeshire Coast Path takes you to some of Wales’ finest beaches. One of the best, in terms of both access and de-stress is Tenby North, just a skimming stone’s throw from Tenby station. As well as Tenby’s pretty harbour and candy-coloured Victorian houses that line the shore, this sweeping beach is famous for the giant Goskar Rock that appears out of the middle of it. There is a great shuttle bus system in Pembrokeshire in summer months taking you, for example, from Haverfordwest, to the quaint shingle beach at Dale or the stunning, stratified cliffs at Marloes. 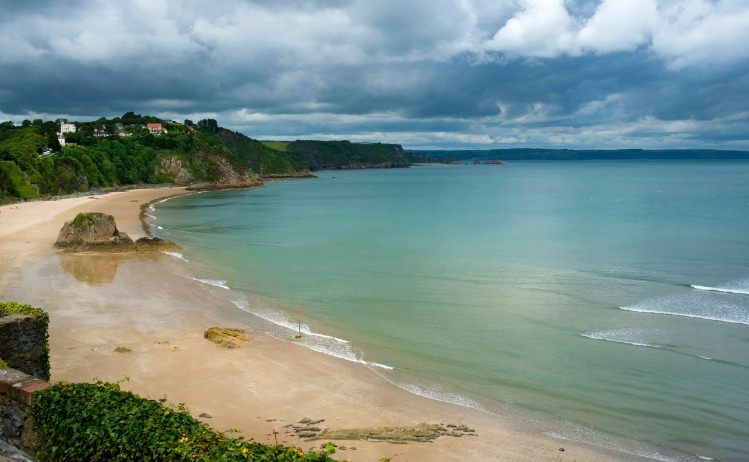